We screwed up the totem pole.

How most companies have their priorities all wrong.
‍

Totem poles are used throughout the Pacific Northwest to commemorate a wide variety of events. Throughout time people have gathered to carve and raise totem poles to do everything from honoring a past loved one to shaming a person who had defaulted on their debts. These wooden billboards were a way to tell people they were going the right direction, communicate important details about an area, and symbolize power dynamics within a group.
‍
If we were to craft a totem pole for most companies to symbolize the main priority of each component of those organizations, the pole would sadly look a little something like this: 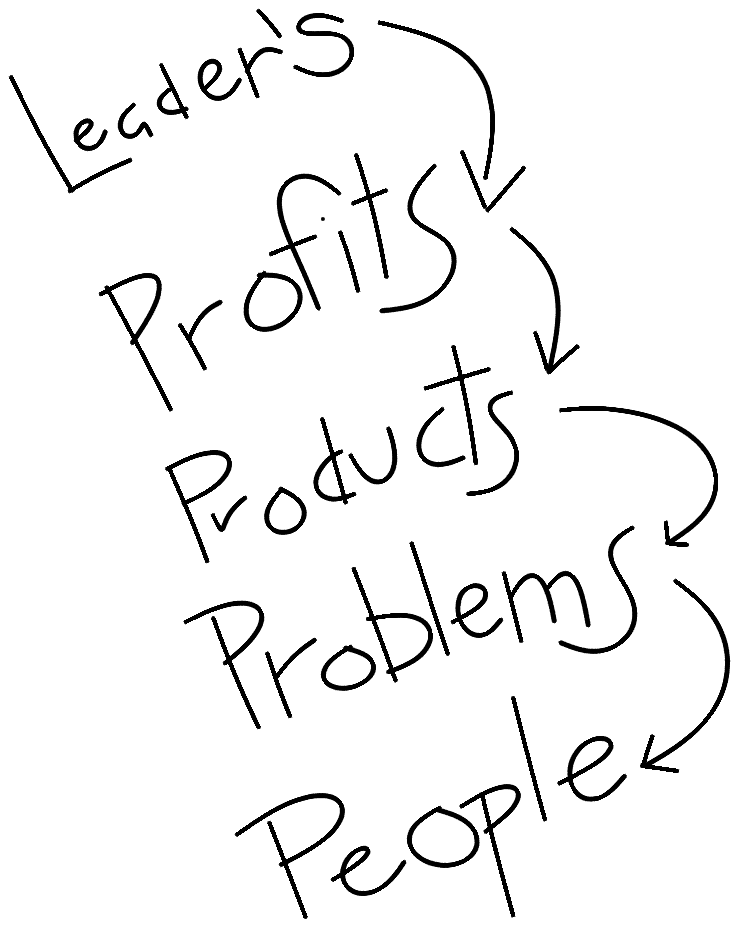 At the top, we have the leaders of the company. In this kind of organization, the leaders are primarily concerned with profit. All their decisions are made to maximize profits before any other priority on the list, which means that they sometimes make decisions at the detriment of the other things on the totem pole.
‍
Next is profit. On this priority totem, profit’s main goal is to dictate the decisions of the product itself. Profit sacrifices areas of the product that don’t generate profit quickly and over-indexes on features that have the most immediate financial return.
‍
The products themselves then take the pressure from profit and focus on problems that will generate more revenue. Each lower item on the totem pole inherits the priorities from the parent components above it, so in this case the leaders who are the most concerned about profits dictate what the products should do, which in turn decides which problems the products solve.

Last on the totem pole are the people. They are last on the list because, in this environment, the people aren’t allowed to decide what problems they’re solving. The problems are determined for them. So, the people end up being primarily concerned for themselves. Sure, solving the problems dictated to them is important, but only insofar as doing so preserves the self-interests of each person.
‍
Most companies operate in this way. Management prioritizes profit above all else, which forces them to make decisions for their products that maximize short-term quarterly earnings. This then dictates what problems the people at the company solve, who do so out of concern for themselves because they know their jobs can be sacrificed for quarterly profit projections because shareholder value is what CEOs care about most.
‍
I think there’s a better way to build a company’s priority totem pole. Something that some progressive organizations are beginning to discover with massive financial reward. It looks something like this: 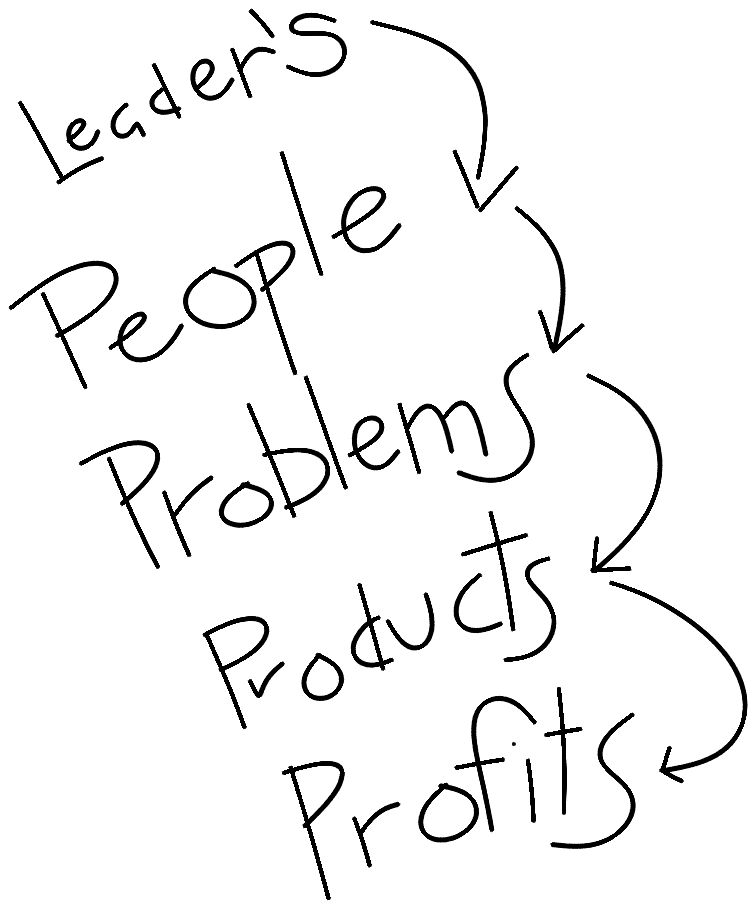 Leader’s at these companies care about their people more than anything else. Sure they track profit and other important metrics to give them a sense for how healthy the ship is, but their primary concern is always their people. They make decisions for the company that will sacrifice anything else on the list to do the most good for the greatest amount of their people. They see profit as a means to do more for their employees instead of seeing their employees as a way to get more profit.
‍
The people then are primarily focused on making incredible products that solve real problems. They are less concerned with their own well being at the organization because their leaders have that part covered (it's the CEO's primary concern). The employees know that their managers will make decisions in the employee’s best interest even if it means less short term profit. So, these employees are freed up to work together to use their expertise in selfless ways that identify and solve problems their customers care about.
‍
The problems that the team identifies then dictate the direction of the product as a whole. It’s not profit that determines the product's direction, which can net faster short-term financial gains, but the problems that customers want solved that direct the product. Over time this builds customer loyalty that can't be won any other way and creates a better world for those people to live in.
‍
Lastly, the products have to be concerned with making money so that the company can have more resources to reinvest in its people and products. But in this scenario, profit is an outcome at the end not an influencer at the beginning. It’s the result of good work building loyalty and making the world a better place.
‍
I think about profit and its role at a company similarly to how I view efforts at personal change. Let’s take losing weight as one goal for personal change. Is it wrong to want to lose weight? Of course not. Is it wrong to track your weight loss over time to get pumped about your progress? Not at all. But it is, however, much less effective to constantly stare at your weight than it is to focus on what kinds of exercise and healthy eating you enjoy.
‍
Focusing on your weight constantly reminds that you are overweight, which is often discouraging and doesn’t change how you’ve labeled yourself. Focusing on how much you love to walk or ride your bike, and how much you enjoy cooking new and exciting healthy meals, allows you to re-frame your personal identity and thrive in the efforts that will eventually bring the weight loss you want. Yes you will still lose weight and of course that’s still a goal, but it’s not the goal. In these scenarios, focusing on the outcome you want is often less effective than focusing on the way in which you want to achieve that goal.
‍
The funny thing is that people (and companies) who do this, who build totem poles with the desired outcome at the bottom of the totem pole instead of the top, often have greater, longer lasting success than those who don’t.